Stuff I'm working on, SIE updates and other things

Thought I'd create a thread to dump teasers and updates in, on stuff which I've been working on, not promising anything great in here, but I thought it'd be better than hardly showing anything at all like in the past couple of months (Which were mostly filled with work that isn't necessarily teaseable, as most of it was under the hood).

Anyway, here is a little thing I've been mildly working on here and there over the past couple of months, whenever we needed easier access to some things which would help in testing stuff Sytner and I have been working on. The idea is to one day turn this into an actual public tool with a lot more features, but for now it's an ugly little internal thing, so excuse the visual presentation.

Some of this might get integrated into SIE/SWB potentially in the future. I have more for it planned in general, but this little project hasn't been a priority at all and yes, full fledged camera tool is still planned, but that has the lowest priority of it all.

Note that everything in this video is done in an offline environment and works with a normal client too.

On the topic of SIE, beyond the IFF Object Editor being close to done (Posted a video of it here for those that hadn't seen it), I've been working on finishing the Lua Object Editor, which is nearly done, but still needs some changes. Will tease that when it's presentable. Also been noodling with the Asset Customization Manager file, which will have an Editor in the next SIE update, here is a very rough teaser of it: 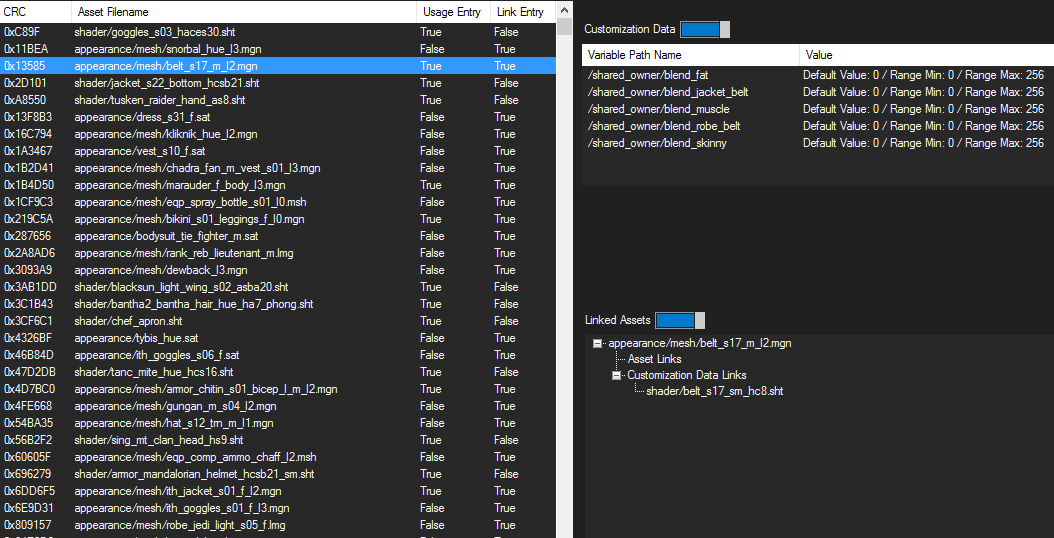 That's it for now anyhow, hopefully this thread will spur me on to get more stuff into presentable states (Most of it is half to near done, it just rarely is polished enough to tease or to release).[/media][/CENTER]
Last edited: Feb 14, 2018
H

Here's a WIP that I need the ACM to finish, if you'd like more motivation.

Haha, well if ACM is done before the Lua Object editor or not, for example, won't matter, because it won't be released unless the update overall is ready.

But yes, helps with the motivation.

I really like the functionality you have given to the offline viewer. It will definitely help me with testing and learning. Keep up the good work!
H

Always impressed! Between Timbab and Sytner none of the modding would be possible - at least not to the degree it's at now or will be! Thank you for all your hard work.
H

Himalayas said:
Always impressed! Between Timbab and Sytner none of the modding would be possible - at least not to the degree it's at now or will be! Thank you for all your hard work.
Click to expand...
Amen to this - SIE makes modding far more available for us then it ever would be otherwise. It's been invaluable for almost everything I've worked on, and I can't wait for SIE 4.0 for the same reason!

People don't even know the pain behind that ~2mins of footage, nice work :heart:.

Appreciate the replies! Slow week in terms of SIE, but I'm aiming for another teaser at maybe the end of this week.

Also, don't forget to give credit to Uli, he was a fundamental part with everything client side in the early days, for years. He's also still always a fantastic mentor when I get stuck on RE related things. Me getting to the place where I am now in terms of what I'm doing and to what scope is in large part due to both Sytner and Uli.

Timbab said:
Also, don't forget to give credit to Uli, he was a fundamental part with everything client side in the early days, for years.
Click to expand...
Pff, well he didn't bloody help me

Sytner said:
Timbab said:
Also, don't forget to give credit to Uli, he was a fundamental part with everything client side in the early days, for years.
Click to expand...
Pff, well he didn't bloody help me
Click to expand...

Well he was for others anyhow, unsure if for me directly either at least in those days, mostly touched things I didn't do, but still found out some of the 'firsts' a lot now consider common knowledge.

Here is a tiny tease/test of what I'm currently trying to get to work properly. Test project to get familiar with CUI.

Far from perfect and still has a bunch of issues, but getting there, slowly.

That's pretty cool Timbab. Would you be able to bind them all to keys or would everything get mixed up?

Super basic and has a bunch of problems at the moment. Even though it's a new object and a separate .inc file, it still seems to be connected in terms of pages and page changing buttons (Only one of the toolbars has changeable pages).

They do work independently though (pressing actions/buttons), which was the crucial first bit, just need to figure out why exactly they're internally connected when I find some time.

Shortcuts could be an issue in theory, depends how they're set up, would need to look into that, but will definitely try to make them work. If I can't figure it out though or if it's too much work, I might just disable the key shortcuts for the second bar.

Also if I can get this to work properly along with the other CUI thing I have planned, I'll most likely release a plugin framework down the road with the Toolbox that allows you to add new CUI objects easier, with hooks in all the right functions. How exactly that will look and work in real life, I'm not 100% sure yet, but it's def something I've been thinking about and where I'd want it to be at the end one day.

If one wants to get masochistic, one could then take this a step further and build in ingame dev GUI tools, WS Editor, etc, in theory anyway if it becomes 'easy' to get new CUI objects in combination with new matching .inc files to work.

Took a bit of effort to figure everything out and some of it gave me a hard time, but I think the second Toolbar is feature complete now, works fully independent from the original main one, saves its slots for each character and works with new key bindings.

Was kind of a neat but at times frustrating little project, I understand the flow of CUI stuff quite a bit more now so that might open some doors to future CUI related things.
Also the Toolbar itself doesn't have to look like the main one, for example, and it also technically isn't limited to just two toolbars, so perhaps, if worked one, one could have WoW style toolbar layout (With interface mods or not).

I was messing around with toolbars, but never got that far with it haha. I'd love to see some tips or hints on how you did it, as I also want to learn more about the UI. Oh and BTW great job dude!

Skyyyr said:
I was messing around with toolbars, but never got that far with it haha. I'd love to see some tips or hints on how you did it, as I also want to learn more about the UI. Oh and BTW great job dude!
Click to expand...
You have to work with the CUI. The client user interface. This means opening up some programs and getting into coding.

Skyyyr said:
I was messing around with toolbars, but never got that far with it haha. I'd love to see some tips or hints on how you did it, as I also want to learn more about the UI. Oh and BTW great job dude!
Click to expand...
Thanks!

Well, in the case of SWG, it's really not that easy. All the logic is inside the .exe and can only manipulated via injection/dll's/hard client edits, etc. The only thing that is exposed is basically the visual and rough data of objects inside the client, in XML format that you probably played with before, so you could only change the visual layout and what not and/or add information only to the extent that is actually utilized by the client itself, you could also spawn an extra toolbar via .INC files, but it'd be logically dead.

If you want to do what I did, you need to look into learning hooking/dll injections, use programs like Ollydgb and IDA, etc to find the functions and logic inside the .exe and then manipulate them, or copy and make new stuff, as I did with the extra toolbar.

Really not a SWG specific thing to learn, so it can be looked up in a generic sense based on tutorials and information, you really gotta then build your own mental logic and workflow for it, it's really hard and abstract to explain.

Future goal wise, I want to map and expose enough of the CUI stuff and have a framework that can worked with 'more easily' in c++, so one doesn't have to spend too much time with asm and the reverse engineer aspect of it all, though one would still need to do the legwork if one wanted to display specific data of inside the client in your new CUI object, such as list of WS objects, etc.
V

Is it anyway at all possible to make an offline client similar to the MtG Client, but based on another publish's exe?

EDIT: I tried extracting it to a CU-based publish (24), and changed the sLocal.cfg in an attempt to search the TOC's, but it crashes saying it can't find a certain datatable. Guessing this is because it's a prior exe and doesn't support the tocs?

Yes, I can hard mod the exe if you want, send it to me, it should have the same code internally regarding that.

And yeah unsure what the problem is exactly with what you're describing, but yeah some CU things crash the preCU client.
S

eqsanctum said:
Skyyyr said:
I was messing around with toolbars, but never got that far with it haha. I'd love to see some tips or hints on how you did it, as I also want to learn more about the UI. Oh and BTW great job dude!
Click to expand...
You have to work with the CUI. The client user interface. This means opening up some programs and getting into coding.
Click to expand...
lol.
You must log in or register to reply here.
Share: Twitter Reddit Link